This was originally reported as an MDLSITE issue affecting moodle.org:

When uploading a new plugin version the 'Choose licence' language is not the language of the user. 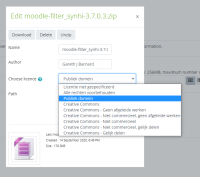 During the triage, it was confirmed and detected that this is actually an MDL core bug.

In the license_manager::get_licenses() caching was introduced as a part of . The list of all licenses is being cached in MUC, including the localised full name of license. So depending on user's current language (the lucky one who initialised the cache rebuilt), the cache is populated in that language and then displayed as such to everybody.

We must not cache the localised full names, only the short names.

has been marked as being related by